“My aim was to show them that English is a key, and not just a subject at school”. Sophia Iwaniuk about volunteering in GoCamp

GoCamp. A transparent, youth-oriented NGO-backed programme and also the most exciting summer imaginable. Surpassing my expectations, it is educational to campers and volunteers alike.

After graduating university in 2018, I left home in London, UK for my first camp, and subsequently returned for another the following year.

I was born and grew up in a Ukrainian household in the UK. Spending most of my summers there, I had a fair idea of what to expect culturally, at least. However, upon my arrival to the training grounds in Kyiv I was humbled and pleasantly surprised to be a minority, spending four days learning and laughing in a cohort with Turks, Australians, French, Slovaks, Egyptians, Canadians and fellow Brits; some of whom are now my closest friends.

With no knowledge or prior experience of Ukraine, I was in awe of each volunteer’s motivations to educate and inspire, and I instantly felt at home and connected to some of the most interesting and open- minded people I have met. 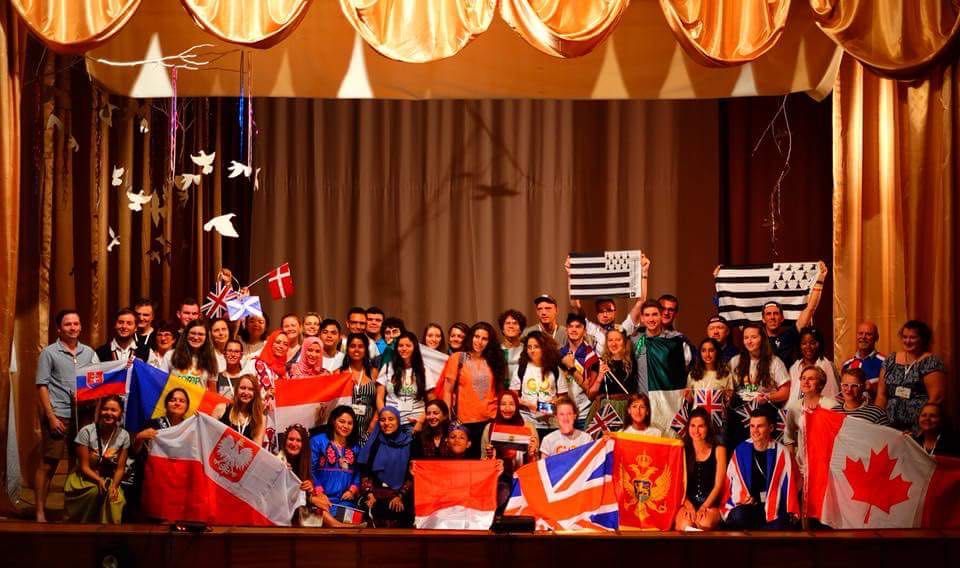 GoCamp’s flexibility factor is great. From the camp location to school programme, you are able to request a school as rural or urban as you would like, and teach in your personal style.

With a desire to access the most rural, and often- underfunded regions in Western Ukraine, I was thrilled to be assigned to a school in the village of Piddubtsi, Volyn region in 2018, and Khlopchytsi, Lviv region in 2019.

After training in the capital, volunteers are usually scattered all over Ukraine to their camps in pairs and assigned to a host family. Both years, my host parents and sisters were incredibly welcoming families, with which I would grow closer over delicious Ukrainian home- cooked dishes every evening. On the first night ahead of the first day at camp I told them that in the house I would gladly speak to them in Ukrainian, however, outside and at camp I was a Brit and nothing else.

Laughing, they agreed, promising to keep it a secret, as did the teachers the following morning.

On the first day of camp volunteers are greeted with shining faces waving through windows, poems in English, flowers, and a million questions all at once. I could not wait to teach and get to know these kids. Through the ice- breaker activities and first few days the atmosphere at the camp was electric and it was apparent that these children all aged from 9-16 were so curious and excited, not only to understand who I was and why I was there, but to absorb the knowledge and lessons that I would deliver.

Each day would focus on a different topic, centring around themes of eco- friendliness, sport and healthy eating. Despite the excitement and optimism of the campers, it was the first time that their school was turned into a summer camp. For the first 3-4 days the children were slightly reserved and I could tell they were unsure how to behave and shy to give wrong answers. It was at points like these that my secret Ukrainian identity was incredibly challenging to maintain. Seeing a blank face or unengaged camper in activities there were many times I could have broken the language barrier or fixed confused faces with a simple translation. But I didn’t.

More than anything, it was clear the kids loved sport. Volleyball in particular. Evenings lesson planning, I included more games, races, teams and rivalry. After a day of relay races to write on the blackboard, outdoor scavenger hunts, and drama script writing, and performances in the sun, they were becoming less intimidated and saw me more as a friend rather than a teacher. This is what I had hoped for.

As camp progressed, some days were more challenging than others. One day I delivered a whole classroom session on rollerblading, without rollerblades. So, the lesson became all about learning the key parts: ‘wheel’, ‘strap’, matching ‘knee pad’ to ‘knee’ on a stick figure I drew on the board. These lessons made me realise that pronunciation was something almost all the kids struggled with. ’Th’ sounds were ’s’- “Senk you, Sophia” is what I heard on a regular basis. The beauty of GoCamp, is, once again its flexibility. As a volunteer you have the freedom to identify areas of weakness to then craft activities that addresses them. The next day I wrote out ‘thank you’, and asked the kids to show me where the ’S’ was. They were stunned that they had been mispronouncing it, so we went round the class everyday which prompted even the shyest of campers to open up. If one person got it wrong, we would start again. This got the kids laughing and ’Thank you, Sophia’ soon became a tongue twister in camp, and it was heart-warming to see them consciously try to un-learn small habits over the weeks.

Before I knew it, 3 weeks had passed and my experience of this generous village community came to a head. I came to know each and every camper by name and personality. I can safely say that the depth of kindness, generosity, and hospitality that the children and my host family showed was an experience in itself.

On the last day, I revealed my secret in their native language. “I speak Ukrainian, and I’m just as Ukrainian as you are”. The playground was full of shocked faces, laughing in disbelief, realising that I could understand them each time they struggled to ask me to go for ice-cream, or made a compliment about my hair or clothes to each other. I was bombarded with questions and spent the whole afternoon answering them on the grass, and went home with bags and bags of goodbye posters and handmade gifts, both years.

I wanted to offer myself as a complete and genuine foreigner. In rural regions in Ukraine it is likely that children have never encountered someone from overseas, and my ultimate goal was to make them see English as a key and an opportunity with real life application, and not just as a subject at school.

I would highly recommend new GoCamp Online. Whilst you may not get to eat authentic Ukrainian borsch or varenyky, the adapted single day sessions do mean volunteers are now able to connect and inspire Ukrainian society at grassroots level from their own home.

If you still have any questions